Leading Innovation for Over 80 Years

My Aching Back: Avoiding Injury from Duty Belts 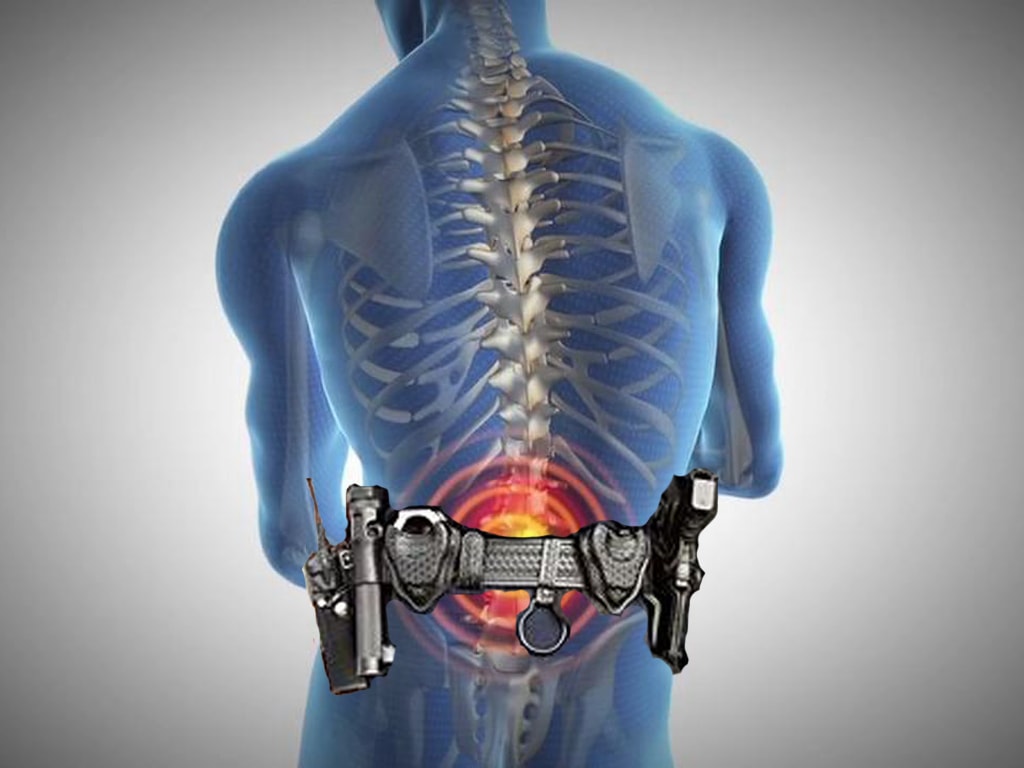 After a few years of toting a duty belt and driving a cruiser you start to feel it. The workout routine helps, as does the constant shifting and movement of the belt when standing. Still, the job is taking a toll on your low back and posture.
Maybe you saw a chiropractor or you try PT to get some relief, and maybe it worked for a while, but after a long detail of mostly standing you start wondering how many years you have left.

Why do so many law officers have bad backs? It’s a combination of stress of the job, equipment load, odd shapes of the gear and its holders, and postural changes caused by driving for hours at a time wearing the gear. Dr. Ian Rassel, a West Coast Chiropractor, has treated many LE back injuries and explains the cause in this video.

Back pain is a complex problem and there is no simple solution. However, we are approaching a time where a majority of the younger law officers joining the force can prevent back issues during their careers. Veteran officers can find relief and maybe hold off retirement a few more years if they will take a few minutes to think about their gear and habits.

Starting from the underwear (hopefully) there are no fewer than 6 layers of materials between your waist and your weapon; underwear, t-shirt, uniform shirt, trouser waistband, keeper belt, duty belt, and holster. Underwear, shirts and trousers conform to the shapes of your hips reasonably well. Most keeper belts and duty belts don’t. The gear on them certainly doesn’t either.

Human hips are contoured, women more than men. Yet, modern keeper and duty belts are made using layers of nylons and plastics and synthetic leathers and cannot conform to the natural contour of the hips. You can wear them for years and they will not mold to the hips.

The only belts that will mold to the body are stretch or leather keeper belts and FG leather or contour cut duty belts. FG leather stretches and bends with time and takes on a slight U shape. All other combination leather and synthetic belts use plastics in layers specifically to hold their shape and will to cut into your hips. Add 20+ lbs. of gear and you have a bruising problem.

Soldiers in the theater are the only ones who wear more gear then LE officers today. The military tries to balance the load soldiers bear evenly between the hips and the shoulders. 50/50/50/50 hips to shoulders, front to back. Law officers cannot do this perfectly as more of the gear is on the sides and front of the hips. Very few officers support any weight on their shoulders. Support systems such as duty belt suspenders are now available to transfer weight evenly from the hips to the shoulders.

Outer carriers for the vests or small slits added to uniform shirts make it simple and easy to wear suspenders designed to connect to your belt keepers. Avoid the temptation to wear a tactical style vest and add surplus gear to the abdomen area and chest. Retention of these items is more difficult than when they are on the hips, and the look is militaristic, which most communities reject.

Duty gear and the burden officers must carry are not changing anytime soon. However, the combination of belt suspension, comfortable stretchy yet supportive keeper belts, and contoured equipment belts will prevent or reduce the severity of most LE low back complaints. Adjusting the gear on the belt during drive time to normalize seated posture will also help.

Stephen Blauer is Vice President at Blauer Manufacturing Co., Inc. and is a recognized leader and expert in the field of public safety clothing design.  He sits on several standards committees related to garment performance and safety, and has led the innovative development of performance uniforms, apparel, footwear, and accessories which has made Blauer the standard for public safety professionals nationwide.